QFC in the Greenfield Recorder

Nice to see this article in the Greenfield Recorder on Wednesday!

Cathy Stanton, one of the organization’s founding board members, said the Quabbin Food Connector was born out of decades of work in the region and a few years of concrete planning.

“This has come out of 20 years of figuring out what we could do for North Quabbin,” Stanton said. “It was two or three years of this simmering in the back and with interweaving food access work.”

Stanton said there were a variety of factors contributing to the need for the Quabbin Food Connector, but the “gap in food systems” in the area was chief among them. The nonprofit serves the towns of Athol, Erving, New Salem, Orange, Petersham, Phillipston, Royalston, Warwick and Wendell.

“We straddle the Franklin and Worcester County lines and it can be challenging to get a lot of players together,” she said. “And COVID confirmed we really needed it.”

Since its inception, the organization has received grants to work with the Opioid Task Force of Franklin County and the North Quabbin Region and the Massachusetts Councils on Aging to provide food services for families affected by addiction or seniors affected by the pandemic, according to a press release. Stanton also added the Quabbin Food Connector provided food bundles, cooking advice and technical support to those who needed it.

The Quabbin Food Connector will be applying for larger grants in the future, Stanton said, so it can create long-lasting change such as forming a food policy council that includes members of the community alongside corporations and farmers.

“We want to find resources to have these conversations … and we can host thoughtful meetings with different actors in the region,” Stanton said. “Eaters need a seat at the table, too.”

Another future plan involves forming an advisory circle of farmers, businesses and community agencies in an effort to address food insecurity.

Stanton said the North Quabbin region is a “fragile environment” and lacks the resources, wealth and population density of other areas, which puts it in a place where local experience is essential.

“We don’t want to use a template,” Stanton said. “We want this in a grassroots way with people who know the area.”

To learn more about the Quabbin Food Connector and its work, visit quabbinfoodconnector.org. 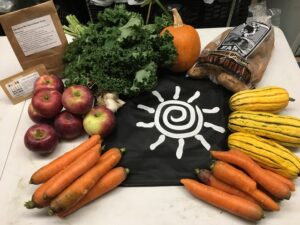